When I first read about Oregon Children’s Theatre’s Jason and the Argonauts play, I had reservations.  Serious ones.  When it came time to renew our subscription, I read the brief summary provided which indicated that two adult men were going to use action figures and paper boats to reenact the classic tale.  Immediately, visions of creepy guys who make you want to run a background check  playing with G.I Joes on YouTube popped into my mind.  I debated whether this was one we really needed to see.  But, Oregon Children’s Theatre has never let us down and I as I have nothing but faith in their judgement and production capabilities, I put our theater fate in their hands and bought the tickets.

This weekend, it was time to find out what we had gotten ourselves into.  When I attempted to explain the play to the kiddos, Chicken simply raised her eyebrows, gave me a skeptical look, and carried on with her business.  Apparently not my best sales pitch.  Nugget, however, was immediately on board.  “You mean they’re going to play with Star Wars toys?  Cool!!”  Not quite, I told him, but all he cared about was that he was going to see someone play with toys.  Whatever floats your boat, buddy.

We left early enough to stop and have a treat at the Starbucks near theater.  If you read this blog, you will notice a theme here.  Things always go better when mom is caffeinated. Then we headed over to check out the pre-show activities.

This time, the activity was folding paper into a boat.  At least that was the intent.  There were laminated instruction sheet with visual instructions. Apparently we fail in the visual spatial skills department and couldn’t figure it out, so we scrapped that plan and made some more than adequate paper envelopes and airplanes.  We were sufficiently pleased with ourselves.

We then settled into our seats, occupying our time with the word searches found in the program, and I continued questioning my decision to come.  The lights went down, I took a deep breath, and the show began.  And about 30 seconds in we were hooked.

This show is as far from a creepy YouTube video as you can get.  The main characters, Josh and Andy, guide us through our journey, moving flawlessly between the variety of characters they play.  As Josh and Andy, they are charming, endearing, hilarious, and I walked away kind of wanting to invite them for a play date.  They take turns playing Jason, Hercules, argonauts, princesses, kings, old men, and a range of other characters and each character is distinct due to their impressive talent.  The action figures are used to perfection, mirroring the movements of the actors and vice versa.  The toys add humor, interest, and really function as supporting cast members.

Any time the play becomes a bit intense, possibly scary for littles, or goes down the path of the classic tale long enough that the younger patrons become a bit wiggly, humor is inserted at the perfect time to re-engage even the youngest viewers.   The show was so well done, you could feel the mood shifting in the auditorium as the actors moved between characters and the tone changed.  You rarely have a perfectly silent auditorium at a children’s theater, when children honor the silent pauses that hold emotion created by the actors, but this happened several times and audience members were captivated by what was happening on stage.  A noteworthy feat.

Nugget was delighted each time Spiderman made an appearance (no, he’s not in the original version), Chicken lost it when a modified version of the theme song from Titanic was sung, Nugget cheered during the sword fights, and they both sat open mouthed when a wind machine was used to blow up an inflatable tail that was attached one of the actors in order to turn him into a monster.

The lighting is beautiful and enhanced a simple but creatively functional set.  What initially appears to be a simple wooden cart transforms into a giant paper boat, a king’s throne, and later comes apart to become two pieces of set.  A wooden box functions as a toy box, prop holder, seat, and ship anchor.

I think the recommended age of 7 and up is about right.  Nugget didn’t really follow the complete story line (his summary was “it’s two guys looking for a really cool coat”), but he laughed and can’t stop talking about how funny it was.  Chicken tends to be a pretty serious theater goer and isn’t known for having strong reactions during the actual shows, although she usually has plenty to say afterwards.  This time, I heard her laugh out loud over and over again, sometimes even throwing her head back.  It was really fun to see.  She leaned over more than once to whisper “this is so good!”  Nugget clapped enthusiastically at the end, and he is definitely not one to applaud if he does not mean it.  Then he couldn’t get out of the theater fast enough to go meet the cast.

Possibly due to having only two cast members and/or the smaller audience size (it’s held in the Winningstad which has a lower seating capacity), the actors took time to chat with each child longer than I have found is typical there.  They asked each child about their favorite part, and provided a response to the child’s answer.  They were nice when Nugget asked them each to sign his program in three specific spots (the cover, their picture, and the word search), and briefly talked Timbers with him when they noticed his Timbers gear.  One even tried to prove that his beard was real when Nugget asked why he didn’t have a beard in the advertising materials.

Overall, this was definitely our favorite show of the season so far and is for sure in the top three that we have seen there.  If you are going to take your kiddo to one show this season, take them to this one.

What it is: hilarious, smart, engaging, an incredibly talented cast, a perfect length for younger viewers (about 70 minutes) but probably best for those 6 or 7 and up, creative, sassy, suspenseful, silly, a simple but effective set, a play you should definitely go see

What it’s not: a fully accessible storyline for very young children (they will likely still find it funny, though)

Do we recommend it?  A million percent yes!  Go!  Go now!

The show is running until May 19th.  Grab your tickets here:  https://www.octc.org

If you can’t make this show (but you really must try), Diary of a Worm, a Spider, and a Fly is up next.  Next season will begin in the fall, and they will be doing Dragons Love Tacos!  We are so excited! 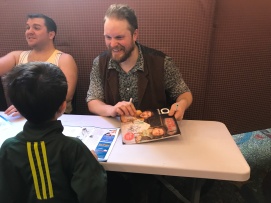 Thank you for visiting!  I am new to the world of blogging, so we shall see how this goes!  I am excited about learning and sharing some of the adventures I have with Chicken and Nugget.

Chicken is my 11-year-old daughter and Nugget is my 8-year-old son.  Although if asked, they will both say they are Nugget.  While I would love to say that we go out and about on a regular basis due to my amazing organization and creativity, it’s really just a survival strategy.  We all do better when we are out doing something, learning together, and kept busy (that’s mom code for the kids fight less if we have something to do).  I started taking them places when they were pretty young, and I am lucky that they are now relatively easy to take out in public and know the behavior drill for the fun things we do.  They also know I will not hesitate to end the activity and head home if they don’t hold up their end of the deal.

Because I am a huge fan of survival, over the years we have found some favorite places and activities, and continue to seek out new adventures.  I often get asked “how do you find all these things?”  Since I don’t have a good or coherent answer, I thought I would start to share the places we go and opinions of them so that maybe you will be inspired to try something new with your kids.

My goal is to provide you with the basic info- where is it, how much does it cost, etc., as well as our perspective.  The good, the not great, if we recommend it.  As we get started, I will share things we are currently doing as well as fun activities from the past.  And yes, we go to a lot of theater.  Like, A LOT of theater. We all love a good musical!

We are doing this completely independently and do not receive any money or perks for our reviews.

All that said, thank you again for taking the time to look at our blog!  We hope hope you find inspiration for things to do with your own chickens and nuggets! 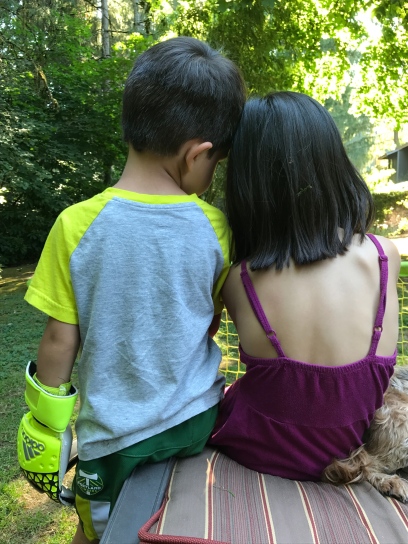