This week, for a variety of reasons, we have spent much more time at home than we typically do.  It was a great reminder of why we choose to stay so busy.  So when an event notice popped up on my Facebook feed indicating that there would be an open house and Timbers away game viewing party in the new section of Providence Park, it was like a life-preserver I just had to grab.

Not knowing what to expect, we donned our Timbers gear, colored Nugget’s hair, and showed up at the designated time and found a small crowd waiting to get in.  As we entered, we were offered free tickets for the T2 game following the Timbers away game. 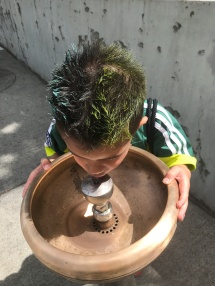 We were directed to take the elevator to the top floor.  Upon arrival, we were allowed to sit anywhere in the Duracell Deck area (the top level of the new expanded park section).  Out on concourse, Timber Joey was there to meet people and food samples were available- Chicken couldn’t get enough of the noodles that reminded me on pancit and Nugget ate more than his fair share of hot dogs.  There were also a few vendors promoting and sampling goods.  Two concession stands were open as well as beer and wine stands with items for purchase.

The game itself was played on the giant new scoreboard as well as another video screen in the stadium.  The whole experience was very cool and laid back.  The crowd was small and mellow and definitely had a viewing party vibe as opposed to a game day vibe.

I happened to snap a picture while they were advertising the T2 game, but this is the screen the game was played on.  It’s huge!

Ironically, the Timbers game started late due to inclement weather where they were playing.  Then the T2 game was delayed due to the storm here in Portland.  This pushed things out later than expected, so we decided  to head home rather than stay and watch the T2 game.  This did not make me popular with Nugget.  As a side note  the Duracell Deck area is covered and we remained completely dry.  Yay!

What it’s not: even close to the energy level of a home game, engaging for kids who don’t enjoy soccer games on TV

What it is: free!, a fun way for kiddos to experience the stadium, a unique way to watch an away game

Do we recommend it?  Sure!  What’s not to enjoy about watching a game outside on a beautiful Portland day?  If the Timbers continue to host these events, we would encourage you to check one out!  And if weather cooperates, stay for the the T2 game.